The Nevis trouser is an extremely versatile piece of kit for your next adventure.

Using fabrics from our Stretch-Tec series the Nevis offers optimum movement with contrast reinforcement panelling at critical high use areas.

Keela Stretch-Tec fabrics are sourced for comfort and durability using superior yarns. The fabrics are
easy care and the quick drying, breathable properties are well suited to this all season trekking trouser.

The Nevis joins a range of trouser models from Keela and are what you may call ‘easy wear’ trousers. They are made from a four-way stretch material so whatever you are getting up to, these will not impair movement. Great for trousers meant for the active outdoor environment. Importantly to match this theme they have reinforced knee sections which are also pre-shaped so bend easily with your knees. The seat is also reinforced for those moments of rest on a handy rocky outcrop. The inside ankle area is also given reinforcement against scuffing and the lower leg is zipped to make life easier getting geared up in a confined space.As well as being very good on the hill, these are great for everyday use and don’t look out of place in (or outside at the moment) the pub.

Keep up to date with the latest news, special offers and newest products from Keela.

Sign up to our newsletter
Holiday Closure & Reduced Working Dates
To try and give all of our staff a break after the interesting year we have all faced, we are working with a much reduced team on 23rd Dec and 29th Dec – and will be completely closed on 24th-28th Dec and 1st-3rd Jan.

This means orders placed during this period may face delays and take longer to arrive – and any enquiries may take a bit longer to respond to, although the team will do their best to get back to you asap, and we will be fully open again on 4th Jan.

We appreciate your patience during this period – and wish you a Merry Christmas and a Happy New Year!

We appreciate the challenges of the current situation with COVID-19, but we remain fully operational for all orders and enquiries.

There may occasionally be a slight delay as we are prioritising emergency services orders, such as NHS, Ambulance, Police and other frontline services. We appreciate your understanding and patience in this situation – If you have any queries please email us

AirXtream Fusion has a high percentage of stretch for added comfort while still retaining its durability.
Its weatherproofing means it can be used for longer on its own when the weather turns bad and acts as the perfect mid layer in colder conditions, reducing bulk while still helping to retain insulation.

A combination of materials brought together in one performance system.
The outer woven stretch component is treated with a highly durable water repellent finish and then bonded to a hydrophilic membrane.

The final component is the lining; this ‘Air Channel Matrix’ system minimises contact with inner clothing or skin and allows for an increased air gap, helping to improve the overall performance of the layering system and reducing condensation without constraining body movement.

AirXtream is designed to minimise the number of layers needed to insulate and protect against extreme elements.

Used as part of a layering system or alone as an outershell, the durable water repellent finish repels rain and snow while the tight weave gives excellent windproofing.

This is an active fit and is very tailored.

If you prefer a looser fit or want to be able to wear layers underneath, you may want to go a size up from your usual size.

The Munro Jacket is an Explorer fit with plenty of room for layering.

Some people find this quite generous sizing, if you prefer a tighter fit you may want to go down from your usual size.

PrimaLoft is incredibly soft, lightweight and breathable with excellent water repellency so you remain dry, warm and comfortable, even under the most extreme conditions.

Ounce for ounce as warm as down, Primaloft microfibres are similar in size and shape to down, resulting in nearly equal insulating performance when dry and even better when wet.

Because its individual fibres are water repellent, Primaloft retains much of its ability to keep you warm, even when moisture has soaked through.

Primaloft Gold Active is designed to regulate your comfort level during intense activity, while offering performance without compromise in a wide range of conditions.

Similar to the structure of down with incredible softness, Primaloft is highly compressible and easy to stuff.
Its resilient fibres are quick to regain their loft to provide uncompromising insulation.

Primaloft insulation is soft and supple like down, making it an excellent choice for active outerwear.
It allows unrestricted movement and its light weight makes it comfortable for extended wear.

We use two different Merino mixes, a 100% Merino which has all of the natural Merino qualities, as well as an 80-20 Merino mix, which gives an increased durability.

Merino wool is a natural fibre which is produced by various species of merino sheep.

Many associate wool products to be irritable and rough against the skin, however, Merino is well known for its warmth and soft feel against the skin, and is regarded as one of the best options for use in baselayers.

What type of clothing contains Merino Wool?
Merino wool can be used for various types of clothing, due to its natural properties to insure a warm soft fit against the skin.

Similarly Merino works in the same manner as a micro-fleece as the fibre is able to trap and disperse the necessary amount of heat. 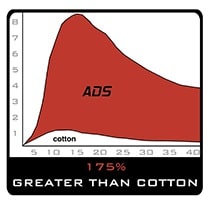 Its specially structured star yarn rapidly removes moisture away from the body, dispersing it over a large area for fast evaporation into the outside atmosphere, keeping you drier for longer.
The moisture management is inherent in the manufactured construction and cannot be washed out, ensuring it lasts the lifetime of the garment.

ADS also protects from the sun’s harmful rays and has a UV protection level of +40.
ADS works in harmony with your body, providing maximum comfort during periods of high activity outdoor sports.

Keela’s ADS garments are perfect for use worn individually in warm weather or as a base layer in conjunction with a layering system in colder environments.

ADS Thermal is the ideal thermal control layer for active use.

Constructed from our ADS star yarn fabric with an added layer of thin fleece on the inside, ADS Thermal is excellent at heat generation without the bulk of a fleece yet is highly breathable.

Years of research and development into base layer fabrics has helped us to achieve Carbonised Active Dispersal System (CADS) – the ultimate wickable fabric base layer.

The specially constructed yarn network rapidly draws moisture away from the body and disperses it over a large area for fast evaporation into the surrounding atmosphere. Its super-fast wicking and high breathability rate works with the human body to keep the wearer dry and comfortable 100% of the time.Being Anti-Microbial enables it to eliminate odours being emitted from the wearer while offering a higher standard of hygiene.

Perfect for use on its own in warm weather or as part of a layering system in colder climates, CADS is the next step in performance fabrics next to the skin.

Every day, millions of people are exposed to insects that can carry malaria, Dengue fever, trypanosomiasis, fi lariasis, leishmaniasis, and other dangerous diseases.

Insect Shield’s long-lasting clothing treatment — proven to last through 70 washings on apparel and 25 washings on gear — is a vital solution for people living in harm’s way.

Lyme disease is the most commonly reported insect borne illness in the United States, and has now become one of the fastest growing epidemics to date, while Malaria is responsible for approximately one million deaths worldwide.

The active ingredient in Insect Shield, permethrin, is so tightly bonded to the fabric fibers that it retains effective repellency through the expected life of the product.
Permethrin is a synthetic version of a naturally occurring repellent found in certain types of chrysanthemum plants such as the African Daisy.
The insecticide properties of chrysanthemums have been known for decades. Permethrin affects the nervous system in insects when they come in contact with it.

Permethrin is effective against a number of pesky and potentially dangerous insects such as mosquitoes, ticks, ants, flies chiggers and midges including those that can carry dangerous diseases such as malaria, dengue fever or Lyme.